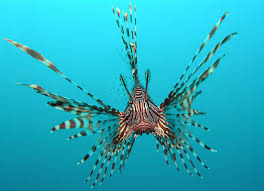 Lionfish are typically considered an “invasive” predator, and are not usually native to the area. One young lady found a lionfish in a freshwater river and decided to take on her own project, and it turned into something pretty awesome. To read about the amazing science project, read the outline below.

So, when Lauren saw a lionfish in the freshwaters of Florida’s Loxahatchee River, she decided to conduct an experiment to see how vulnerable freshwater fish were to this stripy swimmer.

For two weeks in 2012, the then 12-year-old slowly diluted the salt water in the tanks of five captured lionfish. She was surprised to find the fish survived at 1/6 the salinity of the Atlantic. She had to stop the experiment before going further because her project would be disqualified from the science fair if animals were harmed in the process.