16 Year Old Angler Makes the Catch of His Life 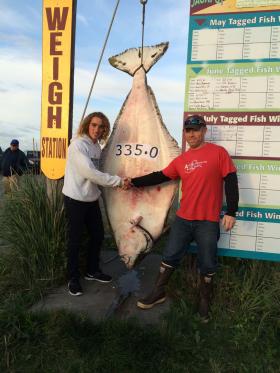 A 16 year old angler made quite the catch recently and captured a story he’ll be able to share for years to come. On a celebratory trip with his grandfather Jackson Hobbs caught a 335 pound flat just south of Barrens. Read more about Jackson’s big catch in the article below.

After obtaining his Eagle Scout rank, the highest attainable in the Boy Scots of America, Hobbs’ grandfather, Tim, treated Hobbs to a halibut fishing trip in Alaska. Tuesday, while fishing with Capt. Travis Larson of Alaska Premier Sportfishing aboard the Venturess, the 16-year-old reeled in a 335-pound monster flatfish and anchored himself, at least for now, in the Homer Jackpot Halibut Derby’s top spot. The weight of Hobbs’ fish is more than 50 pounds heavier that the next largest derby entry, a 277.80-pound halibut caught by Ned Friedman of Chiloquin, Ore., on July 14.The 11 anglers aboard the Venturess were fishing for lingcod south of the Barren Islands Tuesday morning when Hobbs made the catch.